Most companies today provide retirement planning with a 401(k) plan, with or without company matching contributions or profit sharing. While these plans work well for rank-and-file employees, they impose severe limitations on highly compensated employees.

To fill the gap created, many organizations provide their highly compensated talent with nonqualified deferred compensation plans (NQDC), which gives the executive the ability to defer compensation above the IRS limits (2018: $18,500 – Employee catch-up contribution; if age 50 or older, an additional $6,000).

NQDC plans also provide tax advantages, both for employees and employer. Often, we can design with minimal or no impact to the company balance sheet. In fact, over time, these plans can improve the balance sheet. For more information on unique designs, I invite you to download and read an excellent guide from Executive Benefit Solutions (EBS), “Designing Nonqualified Deferred Compensation Plans to Competitive Advantage.”

When you study an executive’s pay package, you find that his/her total compensation package comprises salary, short-term bonuses, and long-term incentives, at least in most industry sectors. In fact, most long-term incentives are equity-based, especially in publicly traded companies. And a large percentage of those company stock awards are restricted stock and restricted stock units.

NQDC plans also work as excellent vehicles to defer those awards, and even diversify them, with the tax shelter of a NQDC plan, as explained in this link to an informative EBS blogpost.

How You Take Distributions Matter

One of the major differences between NQDC plans and qualified plans, like 401(k)s, arises when it is time to distribute deferred compensation to participants. Most NQDC plans allow the participant to elect retirement distributions over a given period, such as 5, 10, 15 or 20 years. Money on the unpaid balances continues to grow tax-deferred. By taking distribution over time, you can increase your payout.

The chart below illustrates the impact of deferring a lump-sum payout over a given period: 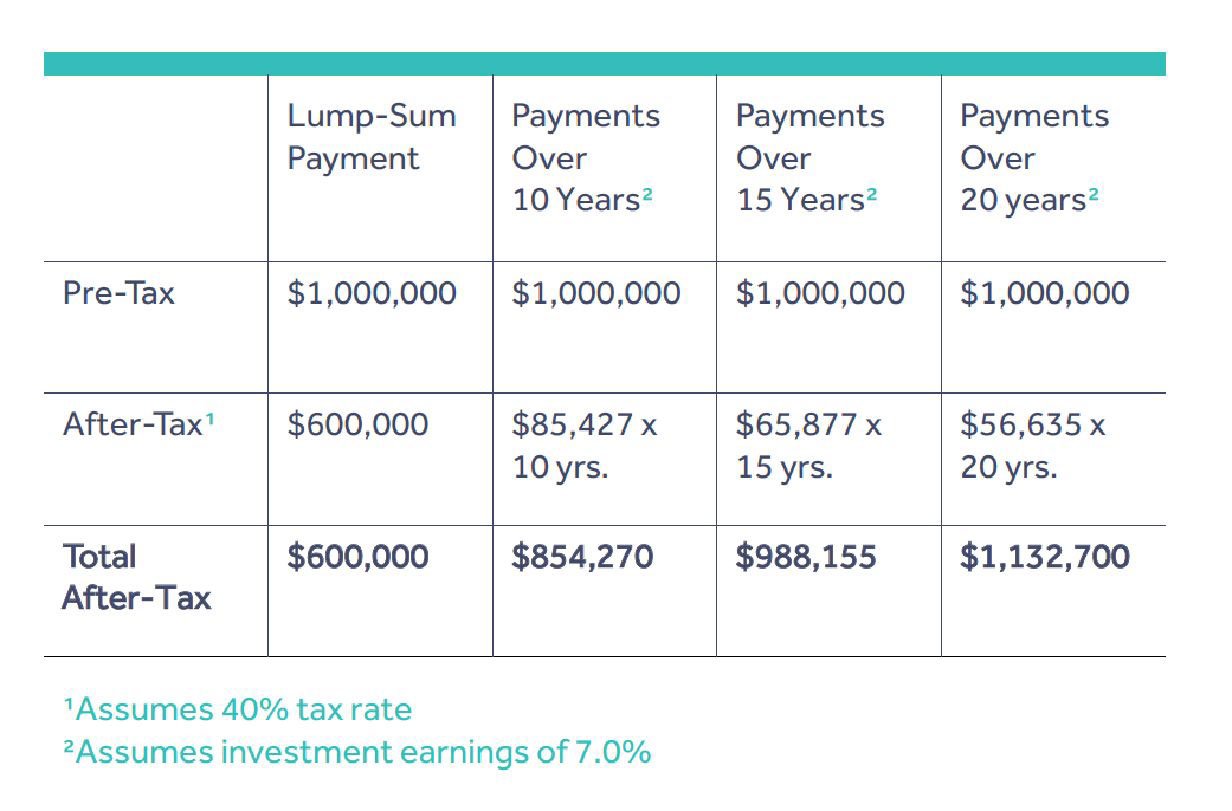 Where You Retire Matters, Too

Throughout your life, the government will likely find some way to tax you. Of course, it will also tax you when you die. But that’s an egregious topic for another day.

It is in retirement, however, when drastic changes occur in both the taxes you pay and how you pay them. That’s why it is essential to understand your likely post-retirement tax situation well before you retire, so you’re ready and able to pay those taxes as needed or develop strategies for minimizing your taxes.

Most highly compensated executives will not be in a lower tax bracket at retirement, largely due to their pre-tax accumulation of wealth, which requires careful planning. Notably, NQDC plans are taxed as ordinary income, both for federal and state taxes.

To your advantage, there’s a little-known benefit which is part of the tax code that can reduce taxes at retirement, if you do proper planning.

Typically, an individual is subject to income taxation by the state in which he or she lives when receiving the income. Some states, however, attempt to tax nonresidents on this income asserting that the income was “earned” or had its source in the first state. As an example, if you deferred your compensation while living and working in California, then retire to Texas, California will collect taxes on that distribution.

State taxation authorities have always targeted retirement income. However, under the federal “Source Tax Law”, retirement income meeting certain conditions will be taxable only by the recipient’s state of residence at the time of payment, regardless of its “source.”

For NQDC plans, the certain conditions are based on how the distributions are paid.

The Source Tax Law is found at 4 U.S.C. § 114. Subsection (a) of that statute and articulates the general proposition that “no State may impose an income tax on any retirement income of an individual who is not a resident or domiciliary of such State (as determined under the laws of such State).”

The statute further enumerates the various types of income that constitute “retirement income” for this purpose, including income from typical tax-favored retirement vehicles, such as:

NQDC plans require the deferred pay to be held by the employer in a book-entry form with no protection from the company’s creditors. Once you retire, there is also the risk that future management could mismanage the company causing it to file for bankruptcy.

Investment advisors spend a great deal of time reviewing investments for hidden risks. They look for a return to compensate for the risk carried by the investment. They seek to diversify investments. They seek investments with transparency.

To correctly use a NQDC plan, the advisor needs to recommend a client sign up only if he/she plans to take a lump sum at retirement or termination (which takes the tax advantages away) or only if they could afford to lose the amount deferred in retirement.

The company’s rabbi trust cannot protect NQDC balances in the event of bankruptcy. Until now, no solution existed.

For more information, do review the materials behind the link above and contact me with any immediate questions. We’re happy to help you sort out these issues with how you take distributions and where you retire.

To your workplace wealth,