Dr. Arthur Laffer is an economist well known to be in the Reagan administration as a member of President Reagan’s Economic Policy Advisory Board from 1981 through 1989. Today, he is the founder and chairman of Laffer Associates, and Laffer Investments.

In this episode, he will be answering the question of why it is so important to have unbias financial advice.

Dr. Arthur Laffer: Hello and how are you?

Enpo: I’m sure they need no introduction but for the people on the call could you introduce yourself a little bit.

Dr. Laffer: Oh my goodness yes my name is Arthur Laffer I’m an economist. I got my PhD at Stanford and undergraduate at Yale. I taught at the University of Chicago, USC Pepperdine. I’ve been advisers to presidents and congressmen and senators and cabinet members for a long time and I just love what I do and I like supply side economics and to me the key to economics is that incentives matter economics is all about incentives and that’s what economics is.

Enpo: Well Dr. Laffer at someone who has earned the trust of some of the most important people in the United States and the world, could you let us know why it is so important for individuals in fact any individual to have unbiased and clear advice when it comes to economics and finance?

Dr. Laffer: What you want to do is make the right decisions and when you make the right decisions you have to have the right inputs. You know there’s an old computer program which we used to call it G. I. G. O. which is garbage in garbage out if you don’t have good objective evidence as well as good and objective advice you’re going to make bad decisions and those bad decisions will cost you and cost you dearly. That’s true in finance that’s true and life that’s true in politics. So, you always want to have as good information as you possibly can and as unbiased and as clear. Also suggestive advice as well to make good decisions.

Enpo: Absolutely, I mean can you give us some anecdotes perhaps about some of the people that you help along the way. Some of the conflicting advice that they may have gotten in the past, and how you kind of talked through and kind of delved into these very complex issues I mean you were part of I would say the economic revival in the eighties so there must have been a lot of differing advice rattling around during that time.

Dr. Laffer: Well let me give you one example of this is just one. I’ll give you two examples if you want, and this is sort of fun. Now with Reagan and with any politicians, I do not ever work for a politician. I did in 1970-1972. I was the first chief economist at the OMB which is white House. I was George Shultz’s right-hand person and I found out what I don’t do well. I’m not a good government employee. But, what I have done is I’ve been advisers to presidents and senators and congressmen etcetera. And (I’ve been) an unpaid advisors because once you’re an employee you’re an employee and that’s when you’ve got to make your boss happy. But, as long as you’re an advisor, you’re not paid. I mean they can’t fire you they can’t double your pay they can’t halve your pay and then you give them what you think is right and what you hope is right and you do the best you can now an example of that is in 1982.

The president had just passed a tax bill which cut tax rates in the U. S. by about twenty five percent across the board. All right and the economy went into a major dip. It was like July or August of 1982. There was a bill coming up in a lot of people were advising the president Reagan now to get rid of the third year of the tax cuts now we were in the Roosevelt room when president Reagan came up to me and said you know Arthur I just was talking to Marty Feldstein, who is the official the actual employee economists of the president, he said he thinks we should get rid of the third year the tax cut and let me tell you what is logic was if you can and I’d like your comment on it. He said that if we get rid of the third year of the tax cut there will be a smaller deficit next year than would have been. With a smaller deficit there will be less borrowing on the part of the government which means there will be more funds available to the private sector. Which means that interest rates will be lower. With lower interest rates and more funds available for the private sector there will be no more housing starts, there will be more, the hurdle rate for investors will be lowered so there will be more investments with more housing starts with more investments the economy will boom and you will have an increase in output going forward.

Do you have any comments on that Arthur? Well, let me if I can be candid for just a second sir and see if I can restate what Marty said to you. What Marty said basically is that if you raise taxes on workers and producers you’re going to get more workers and producers. Did I get that right sir? And the present smiled at me and said “thank you” and walked away and obviously he didn’t get rid of the thirty of the tax cut we had the biggest boom ever.

I can remember another time was with David Stockman. David Stockman hated me and you know. He came in and we’re in the Roosevelt room again with the President, with Reagan, and David stockman rolled out this scroll that maybe had I don’t know eight hundred categories of tax categories federal tax categories. They were three years ago, two years ago, one year ago, this year next year the year after and the year after that he had that with all the actual data filled in on all of these. He said “okay Laffer, okay Laffer, with your darn tax cuts. Where are the revenues? I want to sit down here and I want to go through this and add your revenues. How in the hell are we going to get those revenues?” And I just looked at him and I said you know David I’d rather be approximately correct than precisely wrong as you are every time you talk and with that the president roared in laughter and we went on. You know the way you do it is by giving your objective advice the way you think things will turn out. It’s not that you won’t be wrong from time to time. You will in fact be wrong a lot of times. But, what you never want to do is bias the answer to please the client or please the president or please the politician. You want them to see exactly what you believe the consequences will be and let him go from there. They were elected. The people you advise in the financial committee it’s their money. It’s not your money. But, what you want to do is give them the best advice you possibly can, the best information you possibly can and to let them make the decisions because they will bear the consequences. Whenever a decision maker is separated from the person who bears the consequences you always risk misleading the person. So therefore, you always want to have the clearest information so you can allow those people who bear the consequences the best available information to make good decisions.

Enpo: Well, Dr. Laffer, thank you so much for that answer and for those anecdotes I feel that when it comes to a decision maker coming up with such a solution for themselves but maybe for their family and for the country it’s important to get that objective advice. Before we will let you off the line, I just want to ask. Is it really true that Ronald Reagan’s favorite jelly bean was the licorice Jelly Bean?

Dr. Laffer: I thought what you were gonna say was that he liked the green jelly and that would have been terrible Enpo. I don’t really know that. I know mine is the black jelly bean. I like the Licorice jelly bean a lot. Since I see it in the Roosevelt room there. He had this big jar. It must’ve been a foot and a half high and maybe a foot in diameter and filled with jelly beans and he didn’t eat them all that much but every now and then all the rest of us are going and dipping our hands in there and grabbing them. I guess today is the day of the corona virus and stuff you can’t dip your hands in the jar anymore. But it was just a fun story, a wonderful way. What a great man Reagan was. I mean he was one of the finest people I’ve ever been with. I loved him dearly and I’ve been working with him since the mid sixties and it was just I mean just a fantastic person to work with and such as a gentleman all the time and damn good president. I mean look at the prosperity we created, it was just great.

Enpo: Well Dr Laffer I’m sure that you are extremely busy right now so I’m going to let you off the line and we want to thank you on behalf of all the listeners of My Financial Coach live that you took a little bit of time to speak with us today.

Check out our Webinars: 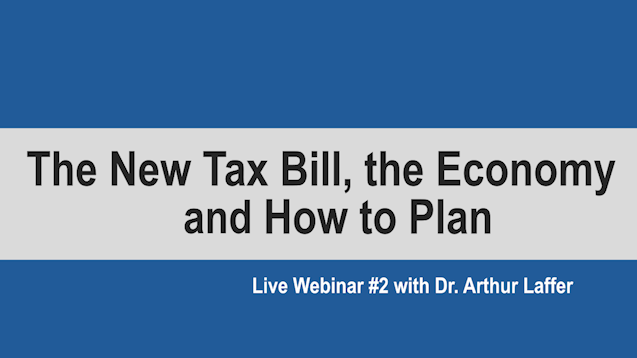 “The New Tax Bill, the Economy and How to Plan” 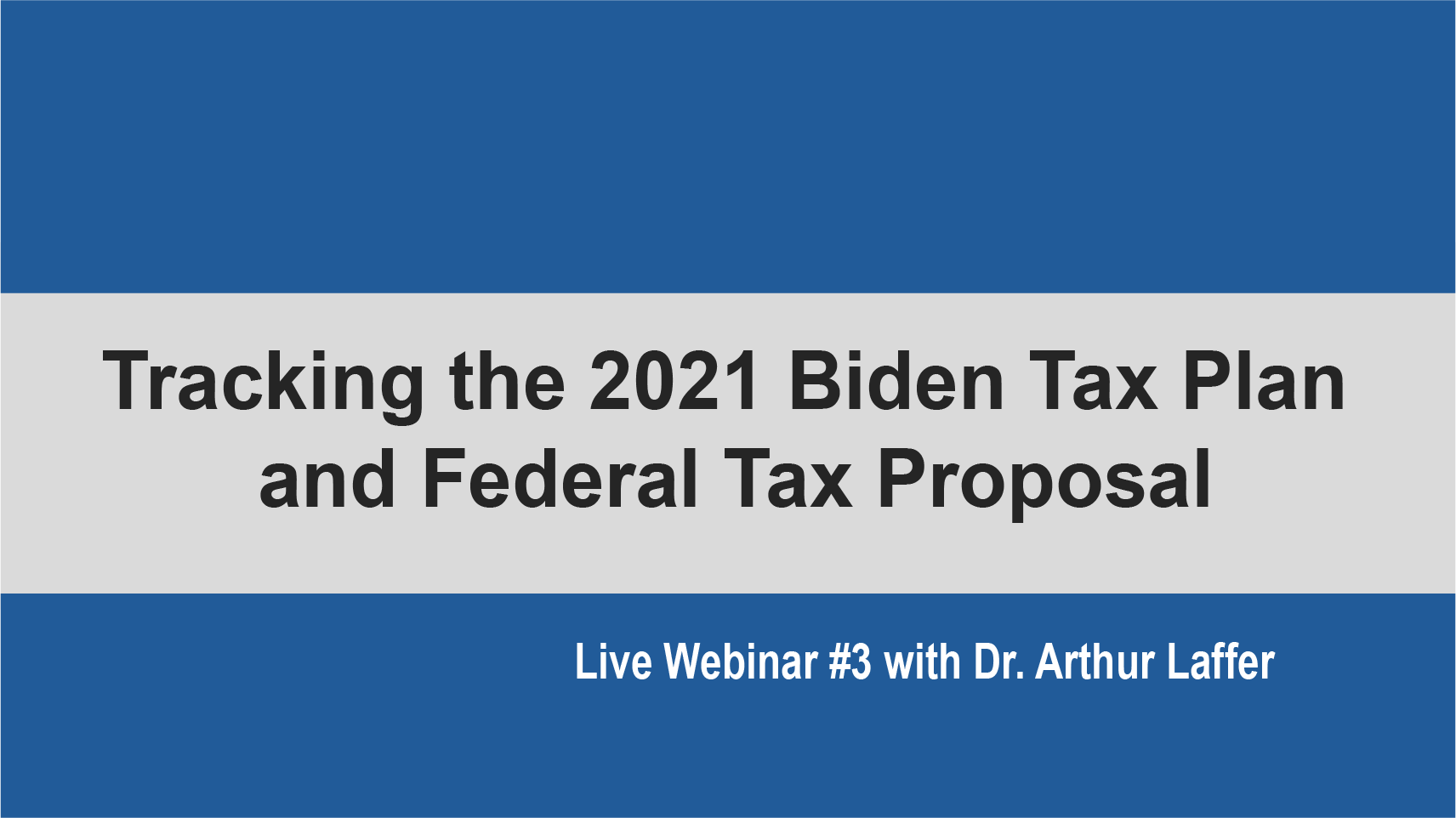 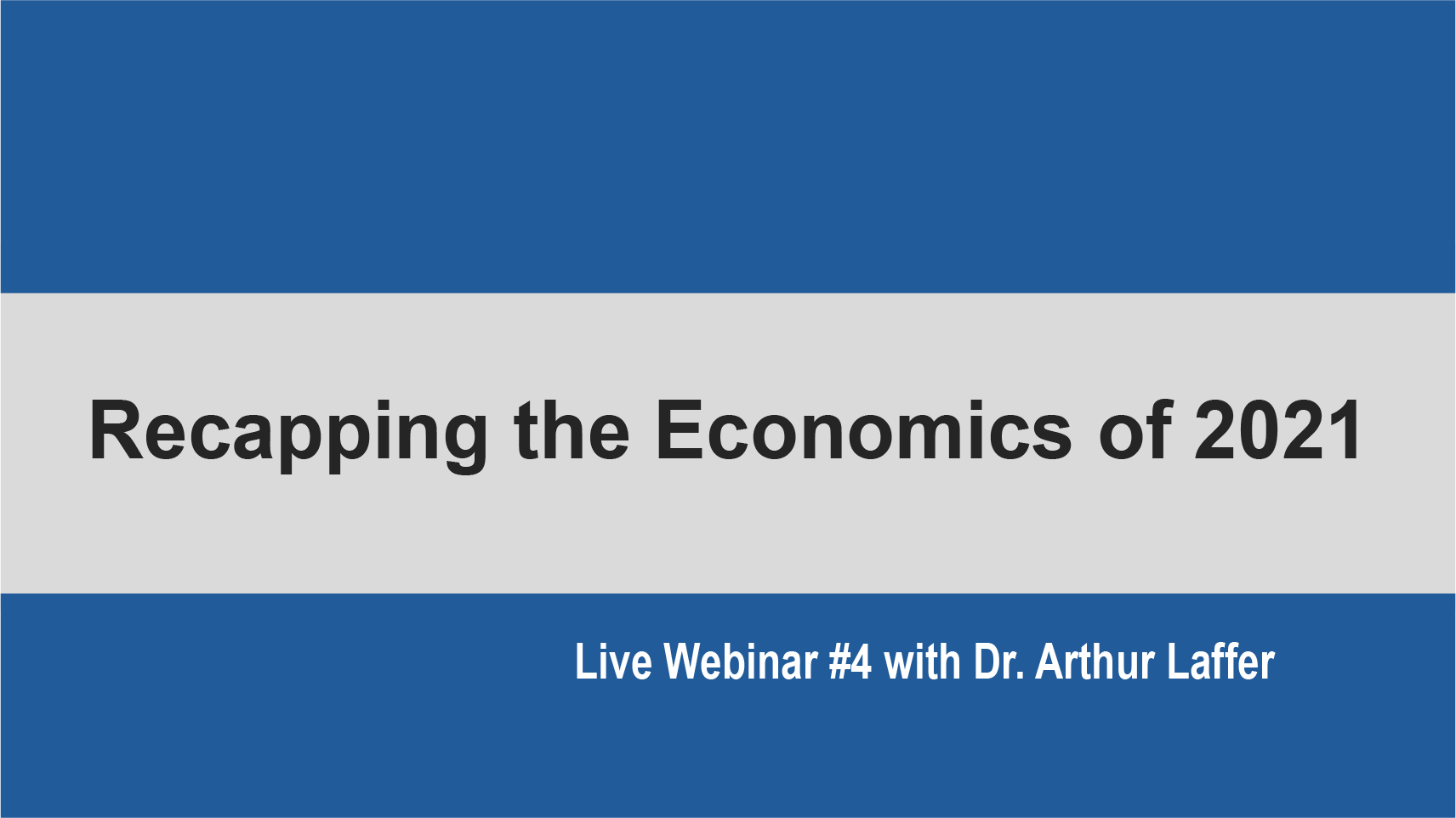