It’s that time of year again, where depending on where you live, might mean freshly fallen snow, and frigid air. However, these conditions are made all the more tolerable with the trappings of the season such as the warmth of crackling wood in the fireplace and a mug of hot cocoa. Regardless of where you live, it is also the season for Required Minimum Distributions (RMDs).

While a congressionally mandated requirement might not exactly invoke the holiday spirit, in this season of giving, it is also important to understand the rules of taking…your RMD that is. Even if you are not required to take an RMD this year, it is important to understand what RMDs are, who they apply to, when must they be taken, how they are calculated, what special provisions they have, and finally what the future holds for the rules surrounding them.

Thus, just as Congress has passed laws penalizing individuals from withdrawing funds too early from a retirement account (often 59 ½ for IRAs, and sometimes as young as 55 in employer plans), there are laws that require distributions be taken starting at age 70 ½. In fact, failing to satisfy these distributions may result in a 50% tax penalty on the distribution!

It is important to note that RMDs are also required of those who inherit retirement assets which we will discuss more in the “Who” and “What” sections of this article.

Who do RMDs apply to?

RMDs apply to all owners of retirement accounts such as IRAs (including SEP and SIMPLE) and 401(k), 403(b), profit-sharing, and other defined contribution plans. One exception is for Roth IRAs, however, Roth 401(k) and Roth 403(b) owners are subject to the same RMD rules even though the distributions are not taxed. For IRA owners, regardless if you continue to work after the age of 70 1/2, you will need to take RMDs. However, those in other employer plans may be allowed to postpone distributions until the year of their retirement (unless they are more than 5% owners).

For those that inherit retirement accounts, the rules are similar to the original owner, however, there are two major exceptions: 1) Inherited Roth IRAs now require RMDs, and 2) the distribution calculations will use a different table.

When must they be taken?

While it might beg the question of why someone would choose to delay RMDs if it means having two taxable distributions in the same year, depending on a person’s income at age 70 ½ and when they might choose to retire, it may be more tax-efficient in some cases.

For those who inherit retirement assets, there is no 1st-year delay to April 1st of the following year. RMDs must be taken by December 31st, following the year of the original owner’s passing. If the owner was already of RMD age, a final distribution based on the original owner’s life expectancy should be taken (if this had not already occurred prior to death). However, for those choosing to take a 5-year distribution method (allowed when the original owner was under 70 ½), no RMDs are required until December 31st of the fifth year after death, at which point the entire balance must be distributed.

How are RMDs calculated?

Since you may be reading this article while on a holiday break, there is no need to go back to math class, and the calculations are relatively easy. It is in using the proper tables however that requires additional explanation. These tables can be found in IRS Publication 590-B.

The formula for calculating RMDs:

Below is an explanation of each table, along with an example:

Table III (Uniform Lifetime) – Should be used for:

Table II (Uniform Lifetime) – Should be used for: 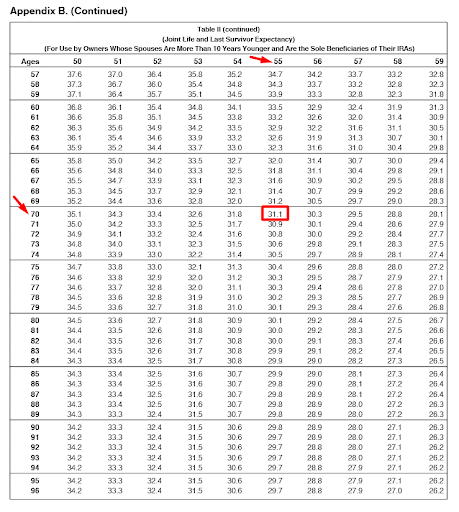 Table I (Uniform Lifetime) – Should be used for: 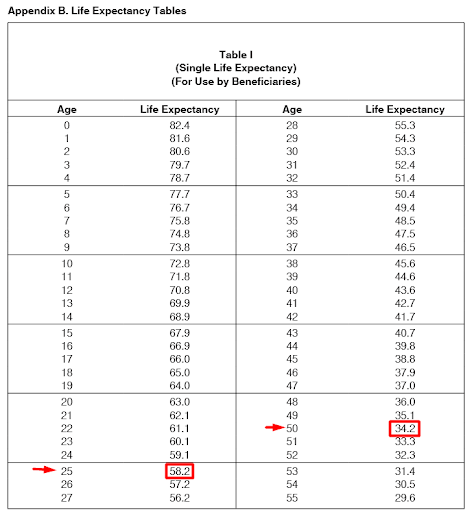 In determining how to establish using the Single Life Expectancy method (Table I) it is important to note that the beneficiary’s remaining life expectancy is calculated using the age of the beneficiary in the year following the year of the IRA owner’s death, reduced by one for each subsequent year.

What does the future hold for RMDs? – Upcoming Legislation

Rules around RMDs have been fairly steadfast since Congress passed the Tax Reform Act of 1986, which began requiring taxpayers over the age of 70 ½ to start taking annual distributions from their tax-deferred defined contribution plans. That said, there have been times that the laws have been adjusted.

For example, in 2008, the President signed the Worker, Retiree, and Employer Recovery Act of 2008, which allowed a one-time suspension of RMDs for the calendar year 2009, including an additional year given to beneficiaries receiving inherited retirement distributions effectively extending the “5-year period” to 6-years.

Another recent change was the Protecting Americans from Tax Hikes (PATH) Act of 2015, which restored Qualified Charitable Distributions (QCDs) permanently (as permanent as any rule might be under the tax law) which had been for years extended only year-to-year causing last-minute tax-planning decisions.

So what new changes can the public expect from RMDs? Well, just this year the house passed The Secure Act in what may be major legislation that could shake up the current rules around RMDs. Some of the biggest changes expected could be a proposed change from entirely removing the age cap of 70 ½ for those wanting to contribute to a Traditional IRA (including provisions to allow a spouse to contribute for a non-working retired spouse as well), as well as changing the RMD age from 70 ½ to age 72.

Though many of these proposed changes benefit retirees, there is one proposed area that could do away with some of the more generous provisions to nonspousal heirs. Under the current law, a legal person can generally begin taking RMDs on inherited assets the year after the original owner passed away, now using a life expectancy table based on their own age.

In effect this allows the heir to “stretch” the distributions of this plan over their lifetime and have more flexibility in how they are taxed (as they can always distribute more than the mandatory amount). With the proposed changes non-spousal beneficiaries may no longer be allowed to distribute this over their own lifetime but may be required to deplete this account over a 10-year window.

While major changes may be ahead, retirement planning both in the accumulation, and distribution phases are key to finding success not only in retirement but in overall wealth management and estate planning. Having a strong team of financial professionals can be a powerful tool that allows you to continue to meet your goals, no matter how the laws change. At My Financial Coach and through its strong partnership with Subject Matter Experts, you can plan on always being at the forefront of the ever-changing financial landscape.

*edit: SECURE Act Raises Age for RMDs from 70½ to 72: The Setting Every Community Up for Retirement Enhancement (SECURE) Act of 2019 raised the age when you must begin taking RMDs from a traditional 401(k) or IRA from 70½ to 72. If you turned 70½ years old on or after January 1, 2020, this law’s changes apply to you and you do not have to begin taking RMDs until April 1 of the year following the year that you turn age 72. If you turned 70½ years old in 2019, the law’s changes do not apply to you.