+1 760.340.4277 customerservice@myfinancialcoach.com
Client Login Service Portal
My Financial Coach > Know-More Blog > Spend Yourself Rich: A Call to Budgeting for the Affluent

Spend Yourself Rich: A Call to Budgeting for the Affluent

“Too legit… Too legit to quit.” These were the opening lines to American rapper M.C. Hammer’s 1991 hit song. While serving as an anthem of never giving up, these lyrics were also

prophetic to what was to come for someone whom many may have assumed was setting himself for an early retirement. Behind the scenes, just as Hammer’s personal finances were spinning out of control, so too were the expenses for the world tour of Too Legit to Quit. Thought to be worth over $30 million in the early 90s, by 1996 Hammer was millions of dollars in debt and was forced to file for Chapter 11 bankruptcy.

We hear financial “sob” stories like this about rich celebrities all the time, and for many in the public, it is often hard to sympathize with the affluent who spend themselves to financial ruin. While it is easy for those on the outside to judge the justice of their fall, it is important to realize that financial literacy affects everyone.

In general, the level of education, income, and wealth seem intrinsically intertwined. One might assume that the most educated people making the highest income, should have the greatest level of wealth. However, a great education and income does not always correlate to wealth. 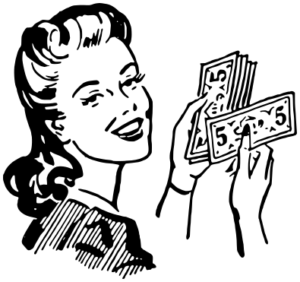 According to Debt.org “The wealthier you are, the more likely you will carry debt. Of course, the wealthier you are, the easier it is to erase that debt.” This is because higher-income earners are more exposed to debt, and they often take out debt to fund investments such as homes, businesses, and their personal education. While there are risks to these investments, the liabilities are balanced by the potential financial rewards that could lead to a better lifestyle and greater levels of wealth in the future.

It should be expected that as one works hard and earns more money that an adjustment to lifestyle should follow. However, there becomes a fine line between rewarding hard work versus the age-old dilemma of keeping up with the prodigal Joneses. Money without purpose is idle money, and too much idle money can lead to comparing lifestyles with fellow high income earning peers. This can create an endless cycle where unregulated personal consumption feeds the insatiable tapeworm that is envy.

Now money itself is not evil as it is a fuel that helps pay for life’s essentials and acts as a resource to grow wealth. However, money can also act as an addicting substance that fuels a earn-to-spend mentality as opposed to a growth mentality. While high-income earners can at times “earn” themselves out of one-off mistakes such as credit card debt, high-income earners can not earn themselves out of bad financial habits.

A high-income earner does not need to break out a spreadsheet and account for every loose cent, identifying the biggest expenses in your budget can help shed light on problem areas.

Here are some potentially large expenses to keep an eye on as well as some solutions:

They say death and taxes are inevitable. However, how much your ultimate tax bill ends up being is subject to change based on strategic planning. While many take pride in a do-it-yourself approach, a certified tax professional can be instrumental. Good ones can often pay for themselves with the tax savings they find. There are many situations that require the lens of a professional, including small business owners, those with more complex income sources such as rent and royalties, as well as special deductions. In addition, partnering with a tax professional and investment specialist can be instrumental in saving you from an unexpected tax bill down the road, as asset location can be just as important as asset allocation.

Another way to save taxes is where you live. It’s important to consider this both in your working years, as well as your retirement years. One thing to consider is that some states have extremely high property taxes.  In addition, some states may present better opportunities for those in the midst of their careers, while other states may present better opportunities for retirees from lower-to-no state income taxes, as well as lower costs of living.

Where you choose to live can have a tremendous impact on your ability to save alongside building equity. In-fact in some areas renting can be considerably less expensive than owning, however, in other cases, the reverse

may be true. When deciding to make a home purchase, be sure to consider the amount of time you plan to stay in an area and the mobility of your career opportunities. Buying a home you can grow into is a great idea, however, be wary of overextending yourself, as an excessive mortgage payment can limit your ability to spend or save in other areas of your life. Bigger homes also require more maintenance and larger utility expenses. A home is a long-term commitment that should not be made without researching all the additional costs both financially and personally.

Childcare is increasingly one of the most expensive items in a household budget. There can be added pressure when both parents work, particularly when these children are young and may require daycare or an in-home

childcare provider. Once children are school age, there must be budgeting decisions made around private school as well as participating in many extracurriculars such as music lessons, sports, and tutoring. Finally, there is the crucial decision surrounding college, from everything to planning savings strategies to pay the cost, paying from income per semester, or looking at student loans. Even overlooked items such as in-state versus out-of-state costs as well as private versus public school costs differ greatly.

While college is not a prerequisite to wealth, many of the affluent work in specialized fields that require a degree such as healthcare, dentistry, law, engineering, and accounting. The education costs for these fields are often costly per semester and could require longer schooling requirements. The future earning potential of these fields often justify the amounts of debt. However, early on, these debts can threaten even the highest income-earners ability to make progress on other life goals.

Today the average amount of student loan debt is around $30,000 for a bachelor’s degree but could be remarkably higher. Fortunately, there are a number of different student loan forgiveness programs that could potentially lower the initial payments during those earlier formative professional years. There is also the option to work in a role that could allow you to have your student loans forgiven. While the incomes of these positions may not be as high and this offer may preclude you from working in the private sector initially, the student loans savings can often outweigh the size of an immediately higher paycheck.

Debt can often be a plague which wrecks a household budget. However, debt can also be a tool to build wealth. For this discussion, we will focus on non return seeking leverage.

An argument can be made that in today’s still historically low interest rate environment, borrowing money has never been cheaper, so you may as well borrow to pay for things and invest your cash for a higher total return. For example: there are many reasons not to pay off your mortgage early, but for other debt, careful consideration should be made when buying big-ticket items on credit.

In addition to paying more for goods and services over time when using credit lines, debt could balloon up through the power of compound interest. When you have a great credit score, the ability to borrow at the best rates becomes easier, but temptation and ease of access can lead to overspending.

The biggest consideration when making a large purchase is the total utility of that item. If for instance you are considering buying a vacation home, you may want to consider how much time you might spend there, what are the total costs, and would it possibly make more sense to save money to pay for

hotel services  if you like to travel to a particular area. Your hard work should be rewarded by great experiences, but sometimes a “rented” experience, makes more sense than a “purchased” one.

Be careful when or where you finance, and remember that wealth isn’t about the luxury vehicle parked in the driveway, but about what you’ve been able to build in your personal assets. Assets could be in the form of retirement funds, increased equity in your home, being able to send children to college, affording adventures with family, or being able to give (whether it be money, or time) to those causes that are most important.

For many of the affluent giving is fundamentally part of their budget, whether it be for personal, moral or religious reasons, the desire to share the fruit of your labor with those in need is important. Whether you give

to  a religious institution, to a favorite charity, or as a support system to family, you should consider this as a built in expense in the framework of your budget. It is also important to consider when or if giving things other than a set percentage of income could come into play if there are material changes in your lifestyle.

There are also other ways the affluent, who often possess unique skills and services, could offer their talent as opposed to their wealth. In addition, it is also important to consider how you provide gifting, and how to make a gift go further. For example, as an affluent benefactor you could consider a matching gift, where any gifts you make might be matched, stretching your gift further.

While the affluent have unique challenges and responsibilities that come with wealth and higher-income, the basic constraints to any person’s ability to build wealth remains the same, spending will always be closely related to wealth accumulation.

“The poor enjoy what the rich could not before afford. What were the luxuries have become the necessaries of life. The laborer has now more comforts than the landlord had a few generations ago.” – Andrew Carnegie from the Gospel of Wealth.

In catching up with our earlier discussion on Hammer, he remains a revered musical artist but despite his lucrative record sales his earlier decisions haunted him for years to come following his initial success. Today, Hammer is making a comeback and thought to be worth around $1.5 million and remains both a cultural icon and philanthropist giving back to his community through prison reform programs and in his ministry. While Hammer gives back  much of his time, one wonders if with proper planning he could also have had even more to share financially with the causes he is so passionate about. And so with Hammer’s own words, when you think about your finances, just think “Too legit…Too legit to quit.”